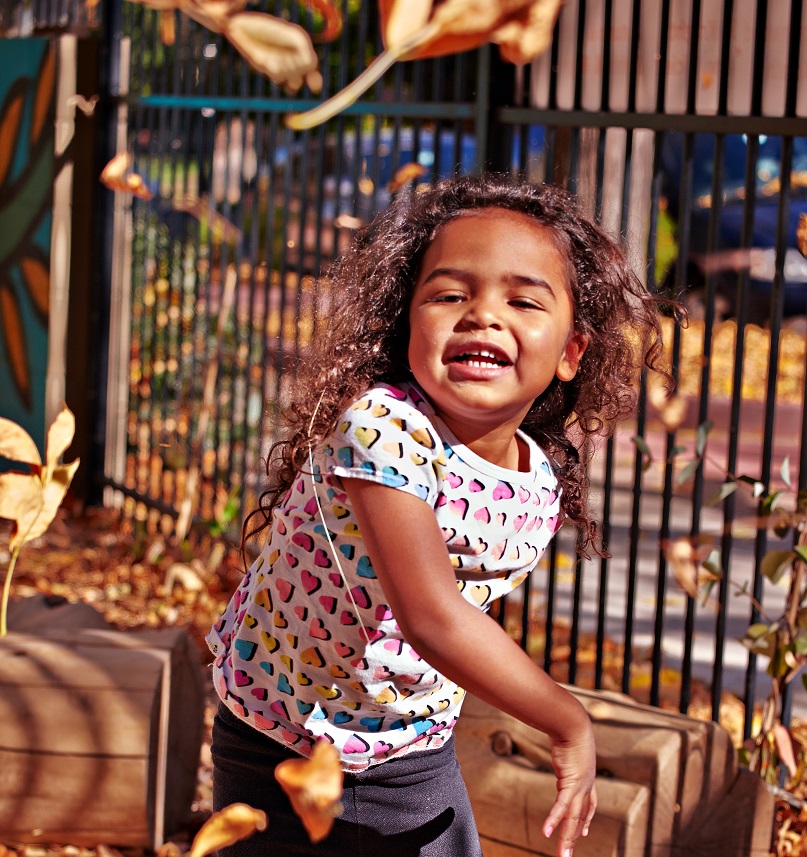 The other day I had the pleasure of visiting the Nature Explore Classrooms at the Warren Village Learning Center in Denver, Colorado, for the first time in almost a year. Separated by the main walkway to the school are two distinct spaces, one for infants and toddlers, the other for older preschoolers. Both were bustling with activity.

Warren Village provides temporary housing for families emerging from homelessness. Most of its residents are families headed by women. Some of these families are escaping domestic violence, and all have faced severe hardships.

Two years ago, the Warren Village Learning Center had a traditional playground. One, large, state-of-the-art, multi-functioned climbing structure, securely footed in earth that was hidden below inches of safety flooring, was the site of play. By current normative preschool standards, this was a good space for children, and Warren Village was fortunate to have it.

Yet numbers and images on the climbing structure’s surfaces, apparently there for educational use, were irrelevant for the children.  Running, climbing and sliding were their basic options. Children who had endured emotional bruising (and sometimes physical, as well), when outdoors with only this climbing structure, ended up in highly physical play. The environment simply promoted gross motor skills development to the exclusion of other kinds of learning or play.

Warren Village’s caring teachers interacted playfully with the children, but also had to be observant for situations requiring intervention. Redirecting behavior, and soothing bruised feelings were among the limited options for teachers on that playground.  Highly physical play, often reflecting emotional bruising in children’s backgrounds, was the option for children. The healing that did happen on that playground was through the teacher’s skills during interventions.

Back then, who could have imagined a nature-filled outdoor classroom? Warren Village’s outdoor area was what playgrounds were, and are, across the country.

If you visited the Nature Explore Classrooms at Warren Village you might see occasional conflict. But conflict is now rare compared to the level I saw on the old playground. Most importantly, what little you might see can be addressed with a variety of healing responses, as opposed to the very limited options for intervention available on the traditional playground. Learning and healing are always available in these Nature Explore Classrooms. “Time outs” can be timed out; permanently.

Here, where children have a variety of play areas and an abundance of materials, they learn that they have freedom of choice, both in activities, and in the ways they can respond to issues originating in their pasts. In both Nature Explore Classrooms, the children of Warren Village have new options for healing and growing. One heartfelt exchange in the infant/toddler outdoor classroom was a charming illustration.

Toddlers were using washable paint markers to make dots, squiggles and designs on their see-through Art Panel. A woman in our visitor group sat on the opposite side, watching them through the clear pane. Children soon went around the panel to interact with her. Some had markers in hand (and marks on their hands). One child made a paint dot on the woman’s hand. A slight flinch told the children that the mark was an “owie,” that needed care. Imaginary bandages were retrieved from pockets and placed on the “wound.”  Healing was instant. The woman received another playful owie. Healing was again performed with love, care and laughter all around.  This play-acting continued for a few minutes with both the “ouch” and the caretaking increasing in drama.

What had started as the children’s ritual invitation into their world of play, placing a dot on the woman’s hand was transformed into multiple opportunities for the children to “heal the owies.”

For children who themselves have had limited power to control the emotional “owies” of their past, healing play owies in the present is a measure of control, and a means of defining one self as a “healer.”

Many children were involved in this play. It’s most likely that some of them have suffered physical or emotional wounds that were beyond their control to avoid or heal. Now they were in control. They were the healers.

Transformative play such as this was unavailable on Warren Village’s former playground. These children need and deserve the learning, healing, growth and transformations available daily in their Nature Explore Classrooms.