The Classroom That Transforms 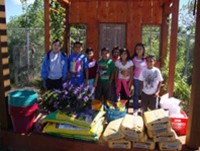 When Certified Nature Explore Classrooms reach their potentials, they are about far more than connecting children with nature: they are about transformations. Under the leadership of principal John Campin, Stephanie Carlson-Pruch (“Mrs. C.P.),” and teachers at the Gomez Heritage Elementary School in Omaha, Nebraska, transformations come in many forms.

Transformations began during construction. After a Nature Explore outdoor classroom design consultation, parents, students and school personnel used the concept plan as a guide to create a space for the children that all knew would be special. Fathers often play a back-seat to mothers in family relationships with schools. At Gomez Heritage, fathers were active in the outdoor classroom’s construction. And they continue to assist in the ongoing caretaking and maintenance. Schools rarely have programs that attract fathers to this level of participation. Fathers who have moved to the front seat of involvement in their child’s education are true role models for the students. This is one transformation.

Mrs. C.P. says that she can see the excitement in the children’s eyes when they go outside to their Nature Explore Classroom. Children can be encouraged in their activities by teachers “without the provisions of testing and having right or wrong answers,” she says. Children’s self-directed learning, independent of their “indoor curriculum” actively engages their teachers as facilitators. A rarity at most schools, but not for Gomez Heritage: another transformation.

Learning indoors requires certain degrees of self-control and concentration. Disorders of attention are major concerns in today’s schools. At Gomez Heritage (as has been seen in other schools), children restless indoors often perform better when outdoors. Mrs. C.P. related the story of a child who had one day run out of medication, and was unable to sit still in class. Brought outside to the Nature Explore classroom, he gained the ability to focus and concentrate. This is a transformation that many teachers have noted as an effect of bringing restless children outdoors to learn with nature.

The Gomez Nature Explore Classroom is under the stewardship of John Campin, the school’s principal. He grew up on a farm, and knows firsthand the benefits of being in nature. “Just seeing the kids and the parents being excited about the outside hands-on things, where they’re contributing to the school, makes a big difference, and makes me feel good.” John Campin’s own experiences in nature inspire his stewardship of the outdoor classroom that transforms so many.