The Bee Handler, and other stories from the Fourth Street Early Education Center 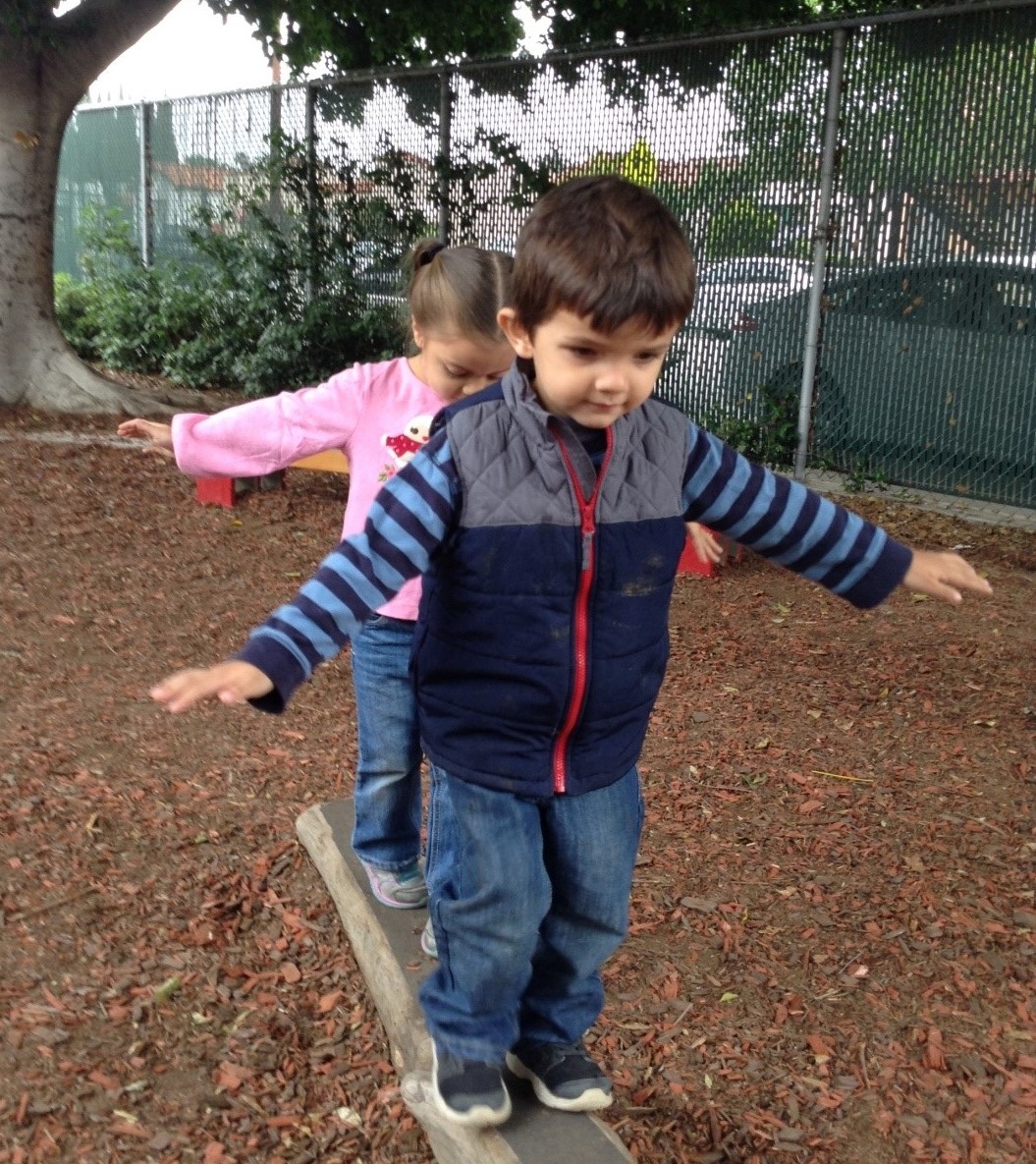 No Need for Words

Imagine finding yourself in a new school in the middle of a large urban area consisting largely of small houses and small businesses. You go outside with the other children to see a “playground” that’s completely different from any you’ve seen before. Instead of swings and slides there are plants, trees, musical instruments, things to build with, and a long track of wood that’s raised a few inches above the ground. Other children are walking this balance beam. You want to try it, but are not sure if you’re ready.

Josefina Navarro, Principal of the Fourth Street Early Education Center, in East Los Angeles, California, tells the story, “She was standing by the balance beam, just looking and looking. A boy from her room saw her, and without saying anything grabbed her hand… He helped the little girl go through the balance beam. There was no conversation. What amazed me was that the little girl trusted the boy, not knowing who he was. She extended her hand. Without guidance, that empathy builds through nature in the outdoors… There’s no need for words.”

A child who has difficulty focusing, and can be very active indoors, finds focus and calm outdoors through his passion for capturing butterflies in a net. Recently he was unable to manage his behavior in his indoor classroom, so his teacher brought him outside, knowing this would settle him.

Just outside the door he saw a grasshopper that wasn’t jumping. He picked it up, only to discover it was missing a leg. Concerned that the grasshopper could not jump like the others, he asked the teacher to glue a leg back on. Placing the grasshopper in a container, he brought over some glue, and then went outside in search of a prosthetic leg. He brought back a number of small twigs, all of which the children discovered were too large for the job. The next day his teacher thought that he’d forgotten about the grasshopper, but the boy soon went outside, again looking for a substitute leg. He returned with a very small twig, and the children suggested a variety of ways to attach it to the grasshopper: crazy glue, tape, spit, and more. The teacher, not wanting to disappoint the children, but not trusting her insect surgical abilities, found a solution. She pretended to place glue on the insect, then put it in a box, added the twig, and told the children “he’ll put it on himself.” They brought the box outside. Photos of the children saying goodbye to their grasshopper were taken in a hurry. The teacher closed the door quickly.

This child immediately journeyed from being unable to manage his behavior, to slowing down enough to focus on a small insect (demonstrating care and compassion), to leading the class in a meaningful project. Without his deep connections to nature, could this scenario have been possible? What does it tell us about the deeper nature of this child (and others like him)?

Sofia (not her real name) was very defiant and difficult to manage indoors when she first started at Fourth Street. Her mother, when applying for the school, had told the teachers that Sophia would be hard to handle. This behavior was understandable in light of the tragedies the little girl had experienced in her few short years. Yet when in the outdoor classroom she gained focus, and soon developed a rare skill that demands concentrated attention, calm, and precise fine motor control. She learned to handle bees. And butterflies. Barehanded.

Sophia has developed the rare skill of grabbing a bee, holding it briefly, and releasing it without being stung. Plants that attract bees are in one part of this very long outdoor classroom. After a few nests were removed from the space in past years, teachers and students have found that if the bees aren’t bothered, they won’t sting. Children who might be allergic to bees simply stay away from that area (with help from teachers).

But somehow (nobody knows exactly how), Sophia learned how to grab bees.  “What’s the big deal?” she says. In fact, she not only grabs bees, but she sometimes attempts to help others get over their fear of them. Here’s the story of a brave teacher who survived an encounter with the bee-bearing child.

Sophia, holding a bee, approached her teacher. “You hold the bee now,” she said.

“I told her I’m terrified of bees.”

“I said, ‘Don’t let it go, please. Don’t let it go.’ And I held my hand out. She thought it was hilarious that I was so scared of it. So she put it on my hand but she never let it go.”

“I was just shaking. But when she put it on my hand she never let go, she just held it there.”

“Did it sting you? No? So don’t cry. It knows you’re not afraid. It knows not to hurt you.” Then she let it go.

“I’m still afraid of bees, but not as much as before.” The teacher said that her reaction now to seeing a bee is to ignore it, or walk away. She knows that she won’t be stung unless she annoys it.

Please note that bees are only in one part of the classroom. Teachers know which children may have allergies, and keep them from that area.

Possible Connections Between the Outdoor Classroom and Student/Teacher Wellness

Studies have firmly established that children raised on farms have lower rates of asthma and allergies than exist in the general population. Could regular exposure to nature, as in our Nature Explore Classrooms, also have a beneficial effect on children’s health? The consensus among the teachers at Fourth Street was that both their and the children’s levels of asthma and allergies seemed to be lessened due to time in their outdoor classroom. If this is accurate, the causative factor might be simply getting more fresh air and sunlight, increased exposure to dirt (from which we’re largely protected in our everyday lives), or something else about being outdoors.

During this discussion Josefina had an “aha!” moment. She administers two preschools, two miles apart. Both are in the same district. Recently the district suffered an outbreak of illness involving diarrhea and fever. The health department required both schools to notify parents in the area.

Josefina said, “My other site, a couple of months ago, we had an outbreak of diarrhea, fever. Over here, nothing happened…” Reflecting on the issue of general health in the students between the two schools, she sees a lot more illness at the other school.

The difference between the schools in their involvements with the brief epidemic can’t be attributed to the outdoor classroom. But could the regular time in nature, getting dirty, exposure to plants and bugs, have had a partial role in student health? Does Josefina’s informal impression, that students at her school with the outdoor classroom are healthier, point in a promising direction? Could the outdoor classroom have a partial “farm effect” on children’s overall health? All are good questions.

Our thanks go out to Josefina Navarro and her passionately committed staff at the Fourth Street Early Education Center, in East Los Angeles, California.  Once again, they have provided fascinating stories, insightful pedagogy, and provocative questions.

If you are interested in learning how a natural outdoor classroom can positively impact children in your area, please contact our team at [email protected] or request a Resource Guide.