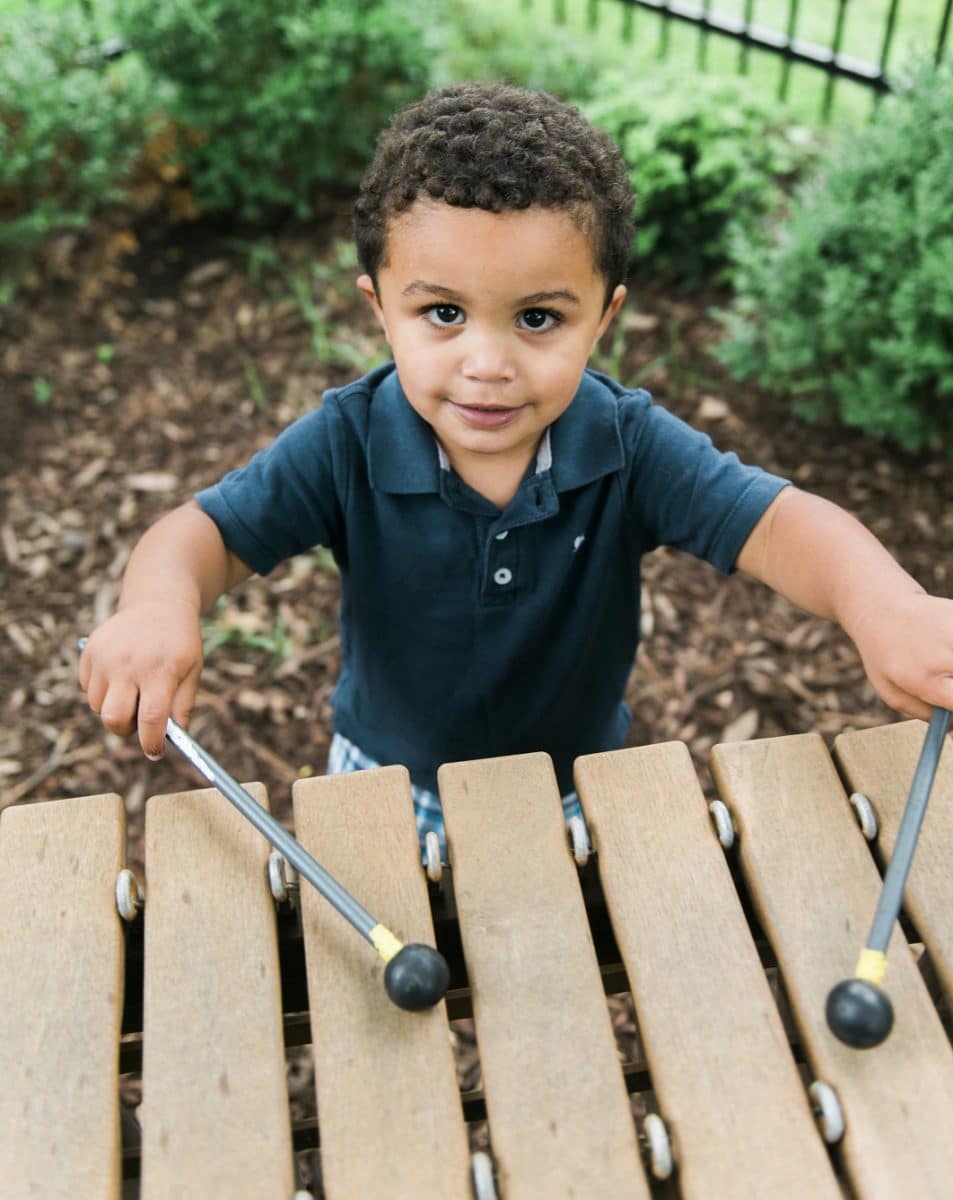 The first time Sean Murphy and Anne Froning built a marimba, they were winging it. They’d never made an instrument—they really didn’t have woodworking experience at all—but, inspired to create a sturdy outdoor instrument that would work well in an outdoor classroom, they dove headfirst into the project.

“We’re artists, and we don’t say no to work,” he joked. Sean read books and took measurements of professional-quality instruments at the University of Memphis. He studied the math and physics of sound and shape, in order to tune the keys and string them for optimal vibration. They presented their demonstration model to the developers of the model Nature Explore Classroom at Arbor Day Farm in Nebraska City, and when it was well received, Sean and Anne went on to create a 35-foot, four-section, 99-key marimba, which remains at the farm today.

Nearly a decade later, the art and science of marimba making are home court for Sean and his wife and artistic partner Anne Froning. Along with a shop assistant, the two produce handcrafted instruments for use in classrooms, parks and museums nationwide. The dynamic duo—founders of the company Being:Art—bring extensive and diverse experience to their artistry. They met when Sean was a musician and Anne was a dancer in an improv group in Memphis. Anne recognized Sean’s innate talent for teaching and drafted him to work with her as a teaching artist in Memphis schools.

Meantime, Anne’s connections to Nebraska and the genesis of Nature Explore run deep.

“I was working with Kathlyn Hatch, an architect who helped Nancy and John (Rosenow) envision Nature Explore,” Anne explained. “I met her through the Lincoln Center Aesthetic Education Institute in Memphis. Kathlyn brought me in as a movement, dance and design consultant to work with her and the teachers at the Dimensions Early Education Programs in Lincoln. We worked with teachers and children, bringing concepts of design into the block area; that work grew into the Nature Explore collaboration with Arbor Day.”

When students and teachers in a Nature Explore Classroom receive their marimba, they may not fully understand its special features. The keys are constructed from sustainably harvested Brazilian ipe wood, one of the hardest, densest woods in the world. Not only is it hearty and weather resistant, its density lends itself to high quality sound. Sean mills all of the wood, and each piece is cut and created to his time-tested specifications. He and Anne designed the frames and all of the components, and Sean created the harmonics of each of the keys and how they work together.

“To begin with, this took hours,” he noted. “But now, because we use the same wood from the same source, and the same measurements, there’s a certain amount of predictability.”

While it used to take about 40 hours to complete one marimba, Sean and Anne no longer craft one instrument at a time. Now, working in small batches, they can complete up to 15 instruments in three to four weeks. It’s hard work—especially when temperatures inside their shop soar north of 100 degrees during the summer months—but it’s extremely rewarding, especially when they happen upon their creations “in action.”

“Once we took friends to visit the children’s outdoor garden at the Memphis Botanic Garden, for which we’d created a custom instrument. There was a little kid there with his mom, and he would run over and play the Kidimbarimba for a few seconds, then run off, then run back and play it again. He turned the playing of the instrument into a game,” Sean said.

Anne chimed in, “It turned into this really complex rhythmic sequence. By the end of a half an hour, he was full-on playing a complex composition. He was so focused that he could really attend to playing the instrument and it sounded beautiful.”

On a road trip, the couple dropped by the Missouri Botanical Garden in St. Louis, in order to visit a Nature Explore Classroom.

“I remember that we showed up and the place was overrun with kids. It was like they’d never played outside before,” Anne said. “All these kids were crowded around the marimba. There were other loose instruments like shakers, rain sticks, and slap drums, too. While the kids were waiting turns to play the marimba, they started to play group improvisational music. That we’ve had a hand in kids improvising is really special.

“That’s what is so beautiful about Nature Explore Classrooms and the concept underpinning all the spaces,” she added. “Kids need to just mess around with stuff.”

Find more information on the Marimba and additional musical instruments at NatureExplore.org