The Heart of Hope

For over fifty years, the Hope Center of Denver, Colorado, has provided early education and meals to special-needs and at-risk children, largely from minority communities. The story of the Hope Center and its Nature Explore Classroom inspired this 2015 blog post. Yet it deserves another; for its heart.

Hope recently hosted two back-to-back Nature Explore workshops by Julie Rose: “Using Your Outdoor Classroom,” and “Heart-Centered Teaching.” Early in the day, Mrs. Gerie Grimes, Hope’s President and CEO, showed us all an astonishing artifact recently discovered in Hope’s outdoor classroom. Found atop a pile of tree cookies, it was first brought to Mrs. Grimes by the children who discovered it. Maybe she knew something about it, they thought.  She didn’t. Neither did the teachers. It was placed on display in the lobby, in hopes that one of the parents or other regular visitors would solve the mystery of its appearance. No luck.

To this day, the person who placed the artifact atop the tree cookies remains unidentified. Yet everyone knows that it had originally lived in the outdoor classroom, and had been removed without permission.

Some of the possible reasons for its placement in the outdoor classroom (re-placement, to be more accurate) are not mysterious. Mrs. Grimes has worked at the Hope Center for forty years, and has been its chief executive for the past ten. For decades, she has maintained deep connections with Denver’s minority community, primarily the African-American population. A force for minority rights and positive social change, she is widely known and admired. The respect and gratitude she garners for her work might be one clue as to why the artifact ended up in her outdoor classroom. But there are more.

From the outdoor classroom’s inception, Mrs. Grimes intended it to be a community resource, open to the public on evenings and weekends when the school’s children aren’t using it. Few inner city outdoor classrooms are left unlocked 24/7. I’m sure that many counseled Mrs. Grimes to lock it when not in use. Yet locking this wonderful family resource would have gone against the community goodwill, built on trust, for which Mrs. Grimes and the Hope Center are known. That this space is always open isn’t as much a clue as to how the artifact got there, but it does speak to the means and opportunity of the person who first removed it, then brought it back.

Actual misuse of the classroom has been rare. A few early, minor acts of teenage vandalism were addressed directly by Mrs. Grimes. They stopped. The surrounding community, largely residential, cares too much for the Hope Center’s great work to tolerate this behavior. But still, the original removal of the artifact, had anyone seen it, would have been considered a theft.

Yes, it had been stolen from the classroom. Under the circumstances, its disappearance, which went unnoticed at the time, was more accurately a premeditated act of borrowing.

And once the artifact had been removed from the Nature Explore Classroom, it was altered before its return. I’m sure everyone would agree that the person who removed, altered and replaced the artifact would be forgiven, even celebrated. If only the culprit were known.

The artifact is a broken tree cookie. This tree cookie is a perfect fit with the “Heart-Centered Teaching” workshop we were attending.

Please scroll down to see it. I think you’ll agree. 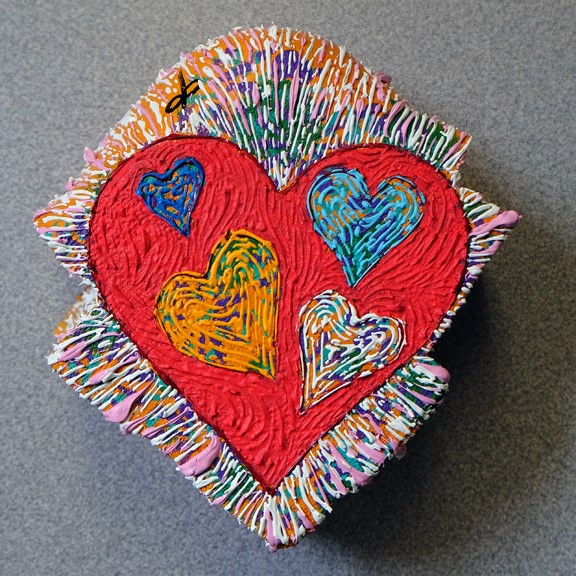 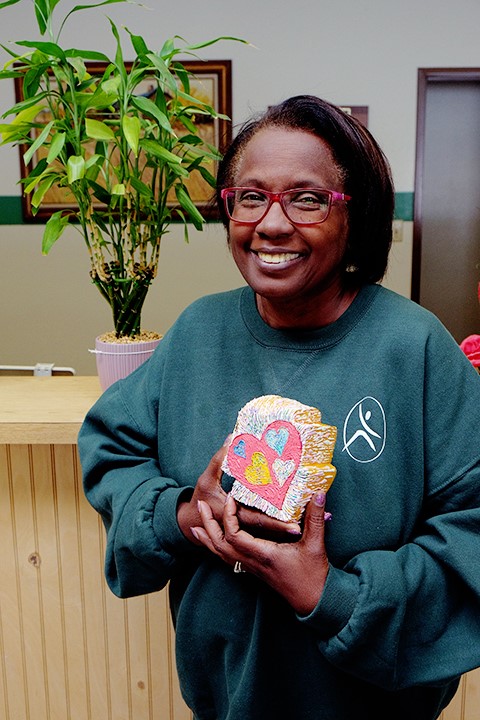