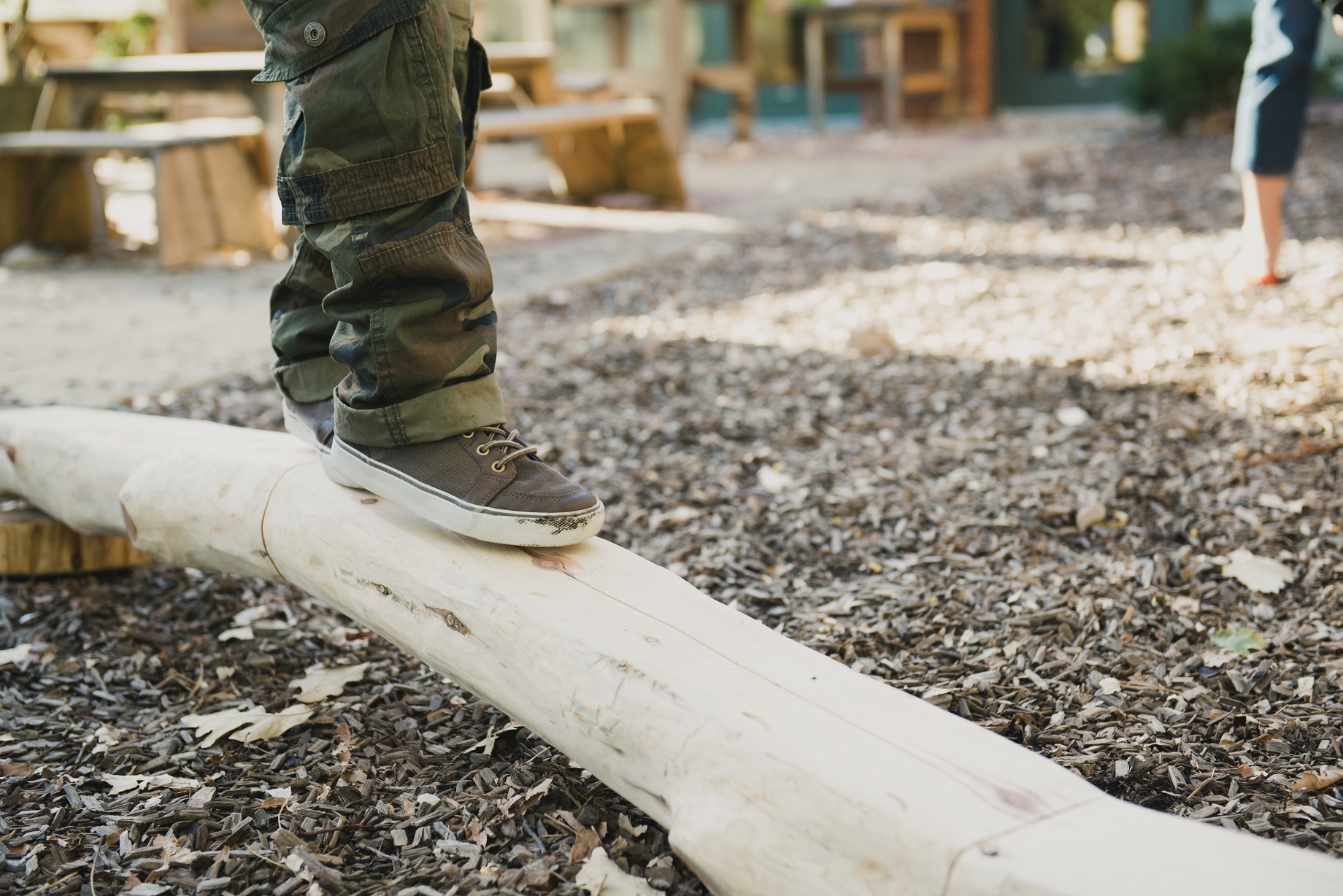 We at Nature Explore are told many stories of children’s transformations through play in outdoor classrooms. Yet we rarely hear the back-story of the child’s original behaviors that change with exposure to nature. To know a behavior’s form is not to know its cause.

You are about to meet Mark, a lively four year old, through his mother, Pam. The outcome of this story is powerfully life-affirming. Yet it begins in darkly disturbing conditions.

We are deeply indebted to Pam for her openness during the interview. She says that nature is the touchstone to which she returns for solace and peace, and that it has given her child many areas of growth.

Pam wants this story told so that other children may have outdoor classrooms and the transformations they inspire.

All names in this story have been changed.

Mark was a danger to himself. At four, his balance was very poor, as was his impulse control. Pam, his mother, says that he would quickly bend over to pick up a dropped pencil, gashing his head on a table on the way down. Getting from points A to B in the classroom often included bumping into furniture along the way. Pam said, “When he gets excited he just goes and goes and goes and he winds up hurting himself.”

He was also a danger to his mother. Mark frequently attacked her. “He would get so aggressive with me that I would have bruises all over my body,” she says. When frustrated, he used his fists instead of words. But at least they’ve been safe since last summer.

That’s when Mark’s father finally began serving 20 years in a state penitentiary for the severe abuse he inflicted on the family. For a year, Mark and his mother had moved between safe-houses. In one crisis, Social Services had them sent by taxi over a hundred miles to another program. As long as they were in the town where Pam was raised, they were not safe from Mark’s father. Or from her family, who would reveal their location to the abuser. The state closed her bank accounts, erased her credit cards, essentially “disappearing” her from available records. She changed her name.

As a baby, Mark was often ill with thrush and frequent ear infections. While Pam was at work, Mark had to be left with his father. She was told by a friend that Mark was not being fed or given his medications when she wasn’t home.

Pam says that because she was forced to flee between safe-houses with Mark, he was never able to develop age-appropriate balance skills. They lived in small, restricted spaces where time outdoors was rarely an option. He simply never had the space to develop gross motor skills outdoors as children often do. Understandably, Mark’s needs usually had to assume a back-seat to the family’s need for safety. Pam didn’t have the resources to care for him in ways that would teach him impulse control.

Then, a little over a year ago, they found a safe residential housing program. Last summer, Mark’s father was finally incarcerated. Environmental conditions began to favor Mark’s development.

In his new school, Mark received occupational therapy services targeted towards his impulse control and body awareness. Therapy helped, yet he was still attacking his mother. Although Mark’s preschool teachers understood his background and needs, only modest success was made in helping him improve his balance and impulsivity. Teachers noted that his clumsy movements in the classroom and on the playground rendered him vulnerable.

The school playground was fully covered by composite safety flooring. Other than running around, the large, multi-station climbing structure was the children’s only option for play and exercise. Two lonely trees poked out from the flooring, but they weren’t climbable.

Mark mostly stayed to himself in this space, as he had difficulty keeping up with the others. His attempts to play with his peers often ended badly. Impulsively, he’d climb the slide from the bottom, getting hit by other children sliding down. The playground was just another source of bruises. Its unvarying sameness didn’t challenge Mark in any way.

Then his school decided to replace their traditional playground with a Nature Explore Outdoor Classroom. This space would have boulders, flowers, bushes, a stage, a “treehouse,” a graded slope in the earth, loose parts, a mud pit, art and building areas, and much more.

Pam was excited for Mark when she saw the new space. She had every reason to be. Her own childhood had been punctuated by extreme physical abuse that ended only when she was removed from home at age 16. One of her early placements had provided a special kind of outdoor therapy that made extensive use of natural settings. Pam grew to love the outdoors as her place of refuge. “I remember that. I know how calming that is.” “It [Nature] gave me the serenity. It gave me the calming, the peace.”

Yet as much as Pam loved Mark’s new outdoor classroom, his teachers were wary. If he couldn’t even move safely through a classroom with a flat floor, how could he negotiate logs, rocks, and other uneven surfaces?

They wanted him to wear a safety helmet, but Mary, the school’s director, said “no.” She told teachers that Mark would get some bumps and bruises on his way to mastering all those uneven surfaces that weren’t as challenging to the other children. Mary asked her teachers for patience. And trust.

Mary was right. Yet even she wasn’t prepared for the speed and depth of transformation that Mark was about to experience.

“It was almost instant with the outdoor classroom… He’s always busy doing something. ‘Mommy come see this, come watch this.’… We were out there one time and he… was like, ‘Mommy watch, I’m Superman’ and he jumped off one of the platforms. It was amazing to see him do this… I can’t begin to tell you how happier he is out there knowing that he has more than just four items to play on. He has a whole world,” says Pam.

For the first time in his life, Mark had true choices of activities outdoors. He could play with the others, or by himself. He wanted to walk across rocks, and jump off them, so he learned how. Mark got a few bumps and bruises early on, though no more than he got on the old playground. To see him now, you’d never know Mark had ever had problems with balance.

But this is only half of Mark’s transformation.

At home, for the first time, Mark is learning “to use his words” when he needs assistance with something. And rather than hitting his mother, he now asks to help make dinner.

Pam says that the outdoor classroom is behind all these transformations. She believes that it is Mark’s testing ground for the skills he learns in occupational therapy. The old playground left him few options other than running around or trying to keep up with children who were more developmentally advanced. Now he easily joins with other children in activities centered on shared interests, boosting his social skills. He is able to practice his climbing and jumping in many locations, alone or with friends, at his own skill level, non-competitively.

Pam says that nature inspires Mark’s intellect and imagination like never before. “He’s learning how to think. And I think that’s pretty amazing… I really do believe it brings more problem-solving skills to the table… Having the chance to explore nature I feel is the best… He’s using his imagination a lot more now. He’s able to use his words instead of crying, having those temper tantrums when he’s not getting what he wants… [The outdoor classroom] has been a castle, it’s been the heroes’ safety ground. It’s been a Christmas tree. It’s been everything.”

Near the end of our interview, Pam wept as she spoke of nature’s powerful healing force in her own life, and now in her son’s. “It doesn’t only work for my son. I feel it transforms a lot of children,” she said through tears.

Pam believes that the outdoor classroom simply provided Mark with exactly the environment he needed all along.