Dragonflies, Alligators and Bears—Oh My! 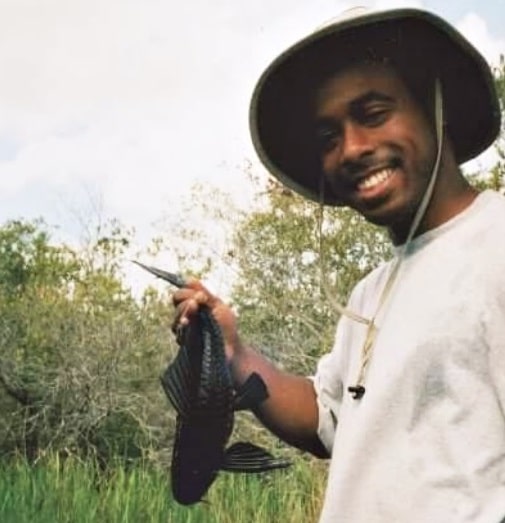 Sitting alone in his room in a cabin, in the middle of an old growth cypress forest, after an hour’s ride from the airport (mostly in pitch black darkness from the total absence of street lights), Britt Moore wondered if he’d made a mistake. He’d grown up on Chicago’s south side. The cabin was in the National Audubon Society’s Corkscrew Swamp Sanctuary, in Naples, Florida, where he’d taken a summer job as a “Seasonal Naturalist.”

Interested in biology and agriculture, Britt had gone to a Farm High School (Chicago High School for Agricultural Science), and was a freshman agriculture student in college when his mentor called. Britt’s high school biology teacher and wrestling coach, who had recently started work at Corkscrew, called to offer him the job. Britt accepted.

You don’t grow up on Chicago’s south side without developing a degree of toughness. Britt toughed-out his first few days at Corkscrew. The agricultural community throughout the Midwest will someday be glad he did. Iowa State University PhD student Britt Moore is now specializing in Soil Physics. He is researching how the use of a rye cover crop, between seasonal plantings of corn or soybeans, can help preserve and enhance soil that is now being degraded by continued planting of only one type of crop.  This research, which has potentials for broad environmental impact, was made possible by the transformation that started in Britt’s early days in the swamp.

Back to the swamp. “Everything crawls and moves,” he says. “I remember my first day down there. I was petrified. There were lizards everywhere. There were dragonflies flying around. I was worried about being stung. I was worried about snakes. Everything was alive. Everything hummed and moved and you could just feel the life in the air. I had never experienced anything like that… I was worried about dragonflies because they were huge. I figured something that big has got to be dangerous. Of course they don’t sting… and they help to get rid of the mosquitoes. But by being so ignorant about the workings of nature I had no idea that this is not something I need to be afraid of.”

Britt’s job as Seasonal Naturalist had two main responsibilities, education and “resource management.” Britt led educational tours for students from elementary schools through college. Tours were led from the relative safety of a boardwalk elevated above the swamp’s surface. (The part where he follows a bear on the boardwalk comes soon.) Resource management meant killing off the swamp’s invasive species (mostly plants) that were a constant threat to the ecosystem’s precarious balance. This part of the job involved getting directly into the swamp.

And that’s where Bret transformed; in the swamp. His initial fears gave way to fascination.

One discovery, during a fish population study, was of a credit-card-sized beetle that dove from the water’s surface to catch fish. Once, Britt found sticks that moved when left to sit. He discovered that they were actually a kind of fly larvae that wrapped themselves in bits of leaves, looking like sticks. Discoveries greeted him every day. When his summer job was over he couldn’t wait to return the next year. “I learned not only to appreciate nature, but to love it. After that first internship I had to get back down there…. I learned in a way that I couldn’t learn from any kind of book… Learning through observation and hands-on experience made a world of difference.”

Between conducting tours and removing invasive species, Britt studied. Largely through books and videos, he learned more deeply about the cypress forest swamp that was feeling more and more like a daily adventure. What he learned about animal behavior allowed him to understand how to better adapt to the wild environment of the swamp. Alligators can be dangerous if you don’t know that they are cold blooded and exertion causes them to quickly accumulate lactic acid in their muscles, and so they can only move fast for a very short time. Although he was never attacked by one, he knew to run quickly in a zig-zag pattern if he did. Alligators can easily be outrun this way.

And that bear he followed on the boardwalk. Britt knew that no cubs were around, that it was probably an adolescent male, and that if he kept a certain distance, the bear would be fine with his presence. Had this happened earlier in the summer, Britt’s reaction, based on lack of knowledge, would have been different, and the experience not as rich in learning. 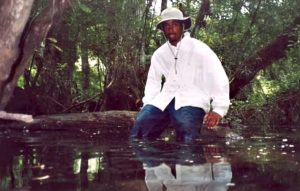 Britt identified three factors that transformed an 18 year old south side Chicago city guy into someone so deeply intrigued by nature that he still talks about Corkscrew with the passion of a schoolchild: relationship, education and direct experience.  Dropped into an environment wholly unfamiliar and very anxiety producing, Britt trusted the judgment of his mentor, coach and teacher that he was right for this job. As he studied the books and videos he saw that learning both enriched his experience and calmed his initial fears. His direct experience with many areas of the swamp fed his growing curiosity in ways that books alone couldn’t touch. Relationship, education and direct experience.

Although most children we work with in our Nature Explore Classroom easily take to the outdoors, some don’t. Children with very little outdoor experience, or who reflect their parents’ discomfort with nature might need some assistance. Here, Britt’s experience can guide us.

Relationship is crucial. When nature avoidant children see us at ease in a natural environment, our example can be calming.  When they see their peers engaged in inviting play, they want to join them.

Education can relax a bug-resistant child. The difference between a bee and a beetle means that one can be studied up close, with nothing to be afraid of, while the other requires cautious observation from a distance.

Direct, hands-on experiences provide the multi-sensory learning that inspires wonder. The young girl picks up the large conch seashell. She runs her fingers around its spiral of blunted spikes, then along the smooth white and pink surface of its opening. Nothing like this can be found in her immediate environment. It’s new, exotic. She’s been told that if she holds it’s opening to her ear, she’ll hear the sea, its home. Holding it carefully, so the spikes don’t hit her cheek, she lifts it to her ear.  She listens. She concentrates. She hears something. She’s never been to the seashore, but she’s sure that the soft rushing sound she hears is the sea. She calls out to her teacher.

Miles from the concrete of his hometown, and at a much later age, Britt had many of these wondrous experiences in Florida.  He thinks of that summer at Corkscrew as his first encounter with “real” nature. When he speaks of it his voice still conveys the excitement felt by our child with the shell.

Britt is now involved with Dr. Stan Howard’s Law and Civics Institute, of Chicago. Together they are developing programs that will connect inner-city African American children with nature. Thanks to Dr. Howard, his wife Anita, the many dedicated contributors to the Institute, and to Britt, children in Chicago won’t have to get stuck in a swamp with dangerous dragonflies to get their first true taste of nature.