Cultivate the Resiliency in Every Child 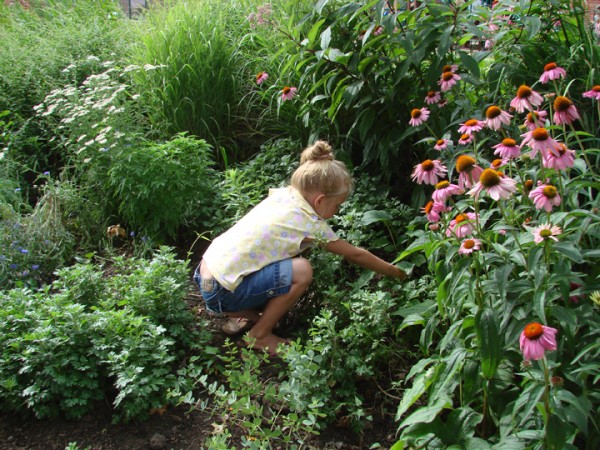 Resilience. Means of developing resilience have been studied for decades. Some believe that children need to be taught to be resilient; others that children are born with an innate capacity for resilience. Which is it? Do adults, having learned how to be resilient in the face of life’s challenges have the skill-set to teach resiliency to children? Or are children innately resilient? Is the best way to elicit this skill development more a matter of finding the best environments? Is it a bit of both?

During my recent visit to the Nature Explore Classrooms at Warren Village, in Denver, I saw “resiliency development” in action during simple play. In the last post we met children playing “owie” with a visiting adult. Using washable paint pens, they made owies on the woman’s hand. But then the “resiliency” part of the play emerged. The children comforted her, and fixed the owie with imaginary bandages. Nurturing and social skills are components of resiliency, and they were originating from within the children. No lessons needed.

Most of the children at the Warren Village Learning Center are emerging from homelessness. “At-risk” children have been a core sample for decades of academic study of resiliency. For children in this Nature Explore Classroom, the ability to develop resiliency is not just important, it is a survival skill.

Then I remembered another child I’ve known at Warren Village. Mark was emerging from a spirit-crushing environment. His impulsivity and awkwardness ensured that his outdoor experiences on Warren Village’s original, traditional playground were punctuated by real owies. By expressing his feelings of helplessness physically, and through the violent example set by his father, Mark had been a danger to himself and his family. If any child should have had barriers to finding “innate resiliency,” Mark should have been a textbook example. And in the traditional playground, Mark was anything but resilient.

But then Warren Village built the first of its Nature Explore Classrooms. Suddenly Mark had new and interesting challenges that he could explore on his own terms. His dangerous clumsiness was tested when first jumping off rocks and swinging on an overhead wooden pole. He mastered swinging and jumping skills. Pam, his mother, said that the space became his castle, that he became Superman, and that the Nature Explore Classroom was his laboratory for growth. As he gained confidence in his developing motor control, his social skills improved through play. As play in nature helped Mark gain newfound mastery of motor and social skills, he rapidly moved from hitting his mother to helping her. Of course he had the skilled support of his teachers and therapists during this period, yet his mother still believed that without play in the outdoor classroom, Mark might not have become so resilient, social, and helpful. Something innate seems to be going on here, and nature (along with skilled teachers) seems to have contributed to its flowering.

Then I remembered another child who, like Mark, had responded to environmental challenges with anger and despair. Antonio’s mother was going through a bitter divorce. He had a very rough start at the Fourth Street Early Childhood Center preschool in East Los Angeles, California. Teacher Edith Figueroa told me that when first at the school Antonio would hit teachers. In their Nature Explore Classroom he stepped on bugs and tried to break plants. Edith cautiously introduced him to the garden. As he grudgingly planted seeds, he told her that they would never grow, because, “everything dies.”

Within days, upon seeing tomato plants beginning to lift above the soil, Antonio started to become their caretaker. He quickly grew to be protective of the plants.

Two months later Antonio’s mother came to the school’s office, crying tears of gratitude. Over those eight weeks Antonio had become caretaker of the plants at home, she said. He then became her caretaker, telling her that she could “go to the park” (the Nature Explore Classroom) with him when she was having a bad day. She asked if she could spend time there. They said yes. She did. After her time in the Nature Explore Classroom with Antonio, she said, “Now I know why my son never wants to leave.”

We may be tempted to theorize as to why the simple act of gardening, paired with the attention of caring adults, contributed to such a rapid and powerful change in this young boy. Maybe his seeing the actual beginnings of the plant growth contradicted a deep-seated fantasy that nothing good can happen. Maybe he simply felt responsibility for having brought about this new life through planting the seeds; a new feeling for him.  Maybe he was desperate for a new beginning within himself that the seedlings represented. Maybe if he could care for these plants he could show caring for his mother, fixing her sadness. What we do know is that Antonio felt the natural space to be calming and healing for him, and thought that it could be so for his mother.

Behind all the maybes is a simple fact that held true for both Antonio and Mark. Nature provided a healing environment for two boys who had been out of control. Nature didn’t judge, or try to correct. Nature didn’t express an attitude towards them that they could use as a sign of rejection. Nature didn’t try to soothe them with promises that they would feel better.

Nature was simply there for them. Materials in their Nature Explore Classrooms gave them a wide variety of options for self-exploration through play, on their own terms, under the care of knowing adults. Maybe, on some elemental level, given the right environment, children innately know how to heal themselves, how to self-develop resiliency. Seemingly against all odds, these two boys certainly discovered resiliency within themselves.

Mark and Antonio are vivid examples of children who had seen themselves as helpless to change their difficult environments. Anger and hopelessness were rational responses while they lived in environments chaotic beyond their control. In Nature Explore Classrooms they learned to be in control. Their transformations in self-image, from hopelessness to helpfulness, allow different futures for themselves and their families. The toddlers playing “owie” in Warren Village’s infant/toddler outdoor classroom are on the same journey. Their travel is more gradual, but it is also a journey toward a more resilient present and future; towards their best selves.

Whether resiliency skill-building happens in simple group play, or starts in a very dark place for the individual child, the examples described here suggest an innate strength that, for these children, were found and developed during experiences in nature. For Antonio and Mark, whose caretaking behaviors transferred from school to the home environment, their transformative self-discoveries were life-changing. Their new, resilient behaviors rippled throughout their environments, enveloping others in the transformations.

How we see children determines how we are when we’re with them. If we see young children as needing us to teach them skills in resiliency, we will treat them certain ways. If we see that children have innate strengths that flower in the right environments, we can facilitate their journeys.