Children Lead a Teacher Back to Nature 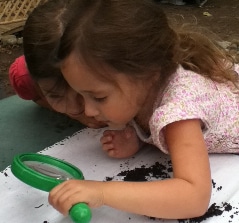 At some point, Erin Borras simply drifted away from the comfort with nature she had enjoyed as a child. The youngest of four, she roamed trails behind her house, playing at streams, finding salamanders, and exploring comfortably in the woods with her sisters. “I could fearlessly go to the woods because I always had my siblings around,” she says. “As a child I was completely submerged in independent exploration in the woods with my siblings.” Erin’s mother reminds her that she once even enjoyed playing with spiders.

Then something changed. Erin sees the period in her life when her parents started placing more emphasis on education as the time she began to lose comfort in nature. She became more concerned with not getting dirty, and spent less time outdoors.

By the time she had become a teacher at the Temple Shalom Nursery School, in West Newton, Massachusetts, she’d lost touch with nature. She described herself as having been in a bubble, with nature on the outside.

“When I first started here,” she said, “I was an indoors gross motor teacher… I would do obstacle courses with them [indoors]. It [the playground] was just a place for them to move their bodies… We went outside less often. Outside was just a recess time.”  Working indoors was more comfortable for her than being outdoors with the children.

Of the playground that preceded the Nature Explore Classroom, Erin says, “That was just their playground. I just observed them.  There was a lot of superhero play, and really basic play that isn’t on the playground [outdoor classroom] anymore. Even when they use the structures to climb, it’s in a different way. Play was cliquey, they were grouped together, and played a lot of basic games—tag and superhero—those simple games that are understood at their age level. We had a lot of problems with the superhero play, bad guy, good guy labels. Some children would get upset about those things, so we’d try to transfer that to different games.”

Erin had strayed from nature, and supervising children on the traditional playground didn’t alter the estrangement. Neither did the children’s play engage them with nature. Erin’s interactions with children on the playground were not the kind that drew productively from her capacities as an educator. Like most other playground monitors in preschool environments, ‘what you don’t see, you don’t know.’

When the outdoor classroom was in place, Erin and her peers saw a qualitative difference in children’s play. They saw explorations replace the superhero play. And they saw children truly engaging with the nature that surrounded them. As the children were drawn more deeply to engagement with natural materials, Erin’s “bubble” stretched; then broke. The catalyst for this change was one of Erin’s own deep personal interests that she shared with the children: art.

Art is important to Erin. “Color for me in art is strong, it’s a calming sensation.” She notes a simple activity using colors as having relaxed her when outdoors. Erin asked children to choose from the many paint strip samples she’d brought from a hardware store. They then searched the area for something in nature that matched their colors. Erin did the same. In this activity she bridged the world that fascinated both her and the children. This and other art projects led Erin to feel comfortable handling natural materials, and exploring them with children. Her class now uses “tons” of natural materials in projects in both outdoor and indoor classrooms.

Erin cites two factors in warming her to nature. The first is her experience with children in the outdoor classroom. Professional development around children and nature, in the form of seminars, workshops and reading, is the other.

Few of us who have spent significant time in nature as children continue that degree of relationship into adulthood. Many become estranged from their childhood engagement not out of design, but simply due to the growing demands of daily living. Erin has shown us how her estrangement was transformed into engagement. Her love of art, and the opportunity to teach in an outdoor classroom, rekindled her love of nature.